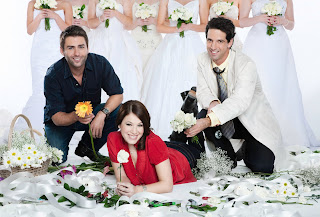 I recently spoke with Marla Sokoloff (The Practice and Desperate Housewives) about her new Hallmark Channel movie, Flower Girl, which premieres Nov. 14 at 9 p.m. ET/8 p.m. CT. The story tells of an unlucky-in-love florist who soon finds herself having to choose between two suitors. The theme was especially appropriate for Marla, as she is due to be married herself exactly one week before the debut of the movie: Nov. 7.

Marla was reminiscing about her days on the ABC sitcom Full House, and these few excerpts made me titter: