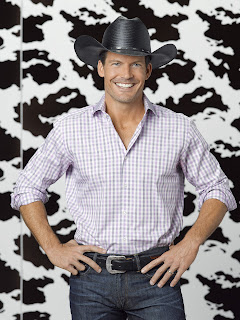 Q: It’s official: I am hooked on “GCB.” Can you give me any info on the handsome actor who plays Blake? — Trudy F., via e-mail

A: Mark Deklin, 44, along with being a super actor is also a professional fight director, talented musician, smarty-pants English and History degree holder, father, husband, and all-around great guy. I spoke with him recently about his role of in-the-closet Blake (who’s married to Cricket, but it’s OK, because she knows and is fine with it), and he gave me some scoop: “As the season goes on, we explore the dynamic of our marriage. What are the rules? If we’re not jealous of the other’s sexual encounters, what are the things that we ARE jealous of? There are certain guidelines. Being with someone else sexually is not seen as a betrayal in that marriage, but having a best friend outside the marriage IS a betrayal. We’ve had a lot of fun figuring it out together.”

Q: I love ABC’s “Suburgatory,” especially Jeremy Sisto. I’ve had a crush on him since “Clueless.” Any chance that one of his former “Clueless” castmates will appear on his new show? — Justine M., via e-mail

A: Not only is there a chance, but it is actually happening: “Clueless” star Alicia Silverstone will join Jeremy on “Suburgatory” for a four-episode story arc at the end of this first season. No word yet on her character, but I can’t wait to see what they come up with!

Q: Can you tell me what one of my favorite actresses, Elaine Hendrix, has been up to lately? — Jeff D., Savannah, Ga.

A: Aside from saving animals in her spare time as the founding officer of Animal Rescue Corps, the “Romy and Michelle’s High School Reunion” actress just landed a lead role opposite Judy Greer in the ABC pilot “American Judy.” The comedy centers on Judy, who gets married and moves to the suburbs, juggling stepkids, her mother-in-law and the ex-wife (Elaine) of her husband, who also happens to be the town sheriff.

Q: You always seem to be on top of this, so could you let me know as soon as you find out who the new contestants will be on the next season of “Dancing with the Stars”? — Pauline R., Oxford, Ohio